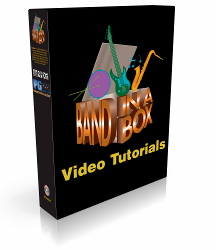 Sit back and watch as we walk you through many of the amazing features of the Band-in-a-Box® program. You′re bound to learn something with our Video Tutorial selection for Band-in-a-Box® for Windows!

This great collection of Band-in-a-Box® tutorial videos created and produced by Team PG are the perfect way to learn how to get the most from your Band-in-a-Box®.

With Oliver Gannon as your teacher, you′ll be composing your own professional quality songs in Band-in-a-Box® in no time!

Band-in-a-Box® for Bozos (and full instructions for all of us)
Buy and Download Now !

We don′t think that anyone is a bozo for having fun with Band-in-a-Box®, but we understand that there are lots of Band-in-a-Box® users, new and old, who want in-depth instructions on all that there is to know about this powerful and versatile program. In these instructional videos we′ll try to answer all of the questions we can think of, and we hope that you′ll help out by letting us know what we′ve missed.

Band-in-a-Box® for Bozos Volume 1:
Installing and Setting Up the Program:

More Info...
News and Notes
May 24, 2022 How to: Using Playable RealTracks in the Notation Window of Band-in-a-Box® 2022 for Windows With the release of Band-in-a-Box 2022, we added Playable RealTracks! These allows you to add MIDI notes to the same RealTrack that is playing, either... May 17, 2022 Fun with Band-in-a-Box® - A Reunion Event: "Life Is Hard" Getting together and playing music and writing songs is a wonderful way to spend some free time! Recently, a few of our Forum members did...
More News...