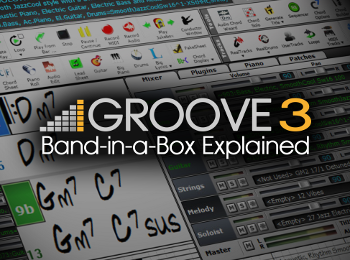 Get up and running fast and start making ultra-realistic backing tracks easily for your songs today!

Eli then reveals the numerous Styles available in Band-in-a-Box®and how to use them. You'll learn all about the StylePicker, MultiStyles, MIDI SuperTracks, RealTracks and more. Eli wraps up this super series with videos on Working with Tracks, featuring Track & Thru Settings, Melodies & Solos, The Melodist and Notation Basics.

As a bonus, Eli gives you a video entitled "Band Outside The Box" which covers the various ways of getting your tracks and performances out of BIAB as either Audio or MIDI files! If you're new to Band-in-a-Box®or just want to go a little deeper into it, this series is a must see... Get "BIAB 2014 for Mac Explained" today!