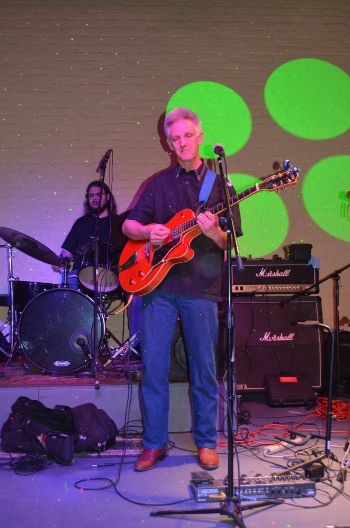 “I purchased my first computer in 1991 (an Atari!), and the previous owner passed along all the floppy discs, including Band-in-a-Box. I'd been using play-along records and my own MIDI sequences for years, but I was immediately smitten with the possibilities of being able to type in chords and just play, and I've been a Band-in-a-Box devotee ever since. I use it at home to practice just about everything from tunes to technical drills, but also for solo gigs, quick recordings of new tunes for band members, chord charts, private lessons, replacing the bassist or drummer if one of them can't make a rehearsal, and the accompaniment on my two jazz guitar instructional videos. Almost every time I play a solo gig someone comes up to ask how I'm getting such great backing tracks, and I always tell them to go to pgmusic.com and get Band-in-a-Box. I couldn't live without it!”  - Clay Moore

Guitarist Clay Moore picked up the instrument while in high school in El Paso, TX and played his first gigs two years later. Studying on his own and with jazz greats Pat Martino, Joe Pass, Howard Roberts, and John Scofield, Clay learned quickly and was soon performing in cities all over the USA, playing in top 40, R&B, blues, country, rock, and jazz groups. Over time he focused on becoming a full-time jazz artist, both as a sideman and leading his own groups. Clay has performed on stage with many internationally famous jazz artists including Doc Severinsen, Joey DeFrancesco, David Liebman, Larry Coryell, Peter Erskine, Lee Konitz, Rick Margitza, Bobby Lyle, Kevin Mahogany, and Chuchito Valdés, and has also backed up a diversity of talents from other genres ranging from opera star Luciano Pavarotti to country singer Larry Gatlin.

In 1998 Clay released his first CD, Meeting Standards, which reached #21 on national jazz radio playlists and also received airplay in Canada, Europe, South America, and on American Airlines' in-flight playlist. In addition to Meeting Standards, Clay has recorded two other CDs under his name, To A Tee and ¡Dámelo!

In addition to his performing and recording activities, Clay has been teaching private lessons and classes since 1976 and created three jazz guitar instructional videos. In 2013 Clay and his family moved to Boise, ID, where he currently teaches at Boise State and the College of Idaho.

More Info...
News and Notes
May 27, 2022 How to: Copy Chords and Song Info from Band-in-a-Box® to a Document Did you know that you can copy the chords and other details of your Band-in-a-Box song into a document? We show you how in this... May 26, 2022 How to: Post Formatting and Responding to Posts on Our Forum Continuing our discussion about our Forums - make sure to check out this video if you're unfamiliar with how to respond to posts and add...
More News...