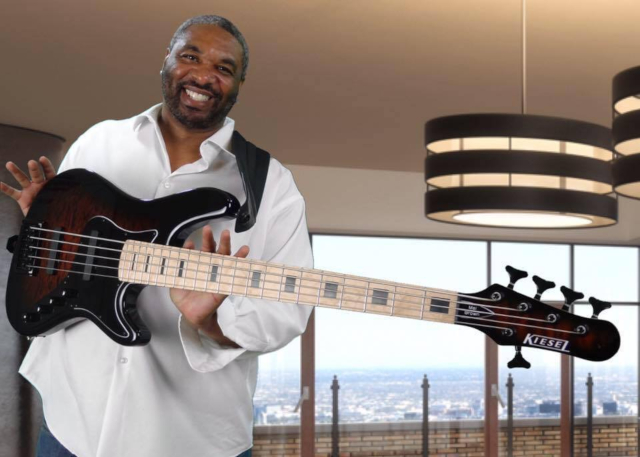 “Band-in-a-Box is my 'go-to' solution for creating accompanying tracks. I've always used it for my in-person teaching activities, but now that so much of activity in this area is 'on-demand' video content online, the need for audio quality, musicality, and ease of use in my production workflow are much more important. The RealTracks have solidified Band-in-a-Box as my primary composing tool as well. As an independent musician, Band-in-a-Box makes it possible to take full advantage of opportunities with full confidence in my final product - for a price that completely makes sense. If you haven't tried it, you're truly missing out.”  - Mel Brown

Mel Brown is a bassist that can do it all. This personable Arizona based 5-stringer has just about done it all too! He's been involved in world class touring, recording, television, movies, endorsements, and teaching at the college level for over 15 years - though you'd never know it by talking to him. Behind his friendly smile, relaxed demeanor and easy going personality is a highly skilled, motivated, and innovative musician.

Born and raised in Denver, Colorado, Mel got his first big break courtesy of the Arsenio Hall show. Mel sent a video tape of himself playing the show's theme song, and asked if he could sit in with Hall's band for a night. Hall, who was known for helping folks along in their careers, obliged and flew Mel to LA for the taping where he performed with smooth jazz saxophonist Everette Harp, actor Jamie Foxx, and the house band.

Armed with his new credentials, Mel landed a gig in Denver recording and touring with a local smooth jazz saxophonist and used the gig to network himself into the New York music scene. In 1996 Mel planned his move to Los Angeles. With the help of some friends, Mel documented his work experience in an innovative multi-media CD-ROM called a "Profile". He predicted that using the device would shorten the time between meeting contacts and actually doing business with them. Mel's belief in the device was so strong that he staked his livelihood on it. He relocated to LA 1997 and used the Profile to introduce himself. It worked, and soon Mel was a well respected and sought after bassist in the Los Angeles metro area. Major trade magazines documented Mel's approach to self promotion using the Profile.

Mel left the road and LA in 2003 to focus on recording sessions over the internet.

Now with three GRAMMY® Award nominations (with 2 wins), and appearances on 13 #1 Billboard albums, 54 Top 10 Billboard singles (19 of which were #1, a book, and a new online video interviewing company designed to turn interviewing into a self-serve shop, Mel is poised to do what he loves the most: sit back in the pocket and just groove.