NOTE: The Android app is not currently available for download from the Play store, and may not be compatible with newer devices.

If you want to find out your version of Band-in-a-Box Server, you can right-click on the green and white musical note icon in your taskbar and select "About".

The newest build of Band-in-a-Box Server supports new features added to the latest versions of the apps, makes connection faster and more reliable, and improves stability.

Band-in-a-Box is a popular music program for Windows desktop PC's.

Important: You need to also have a copy of Band-in-a-Box 2011 (or higher) for Windows to use this app fully!

Band-in-a-Box for Android is an app for Android devices including phones and tablets. There is also a "desktop" version of Band-in-a-Box (BB Desktop) that is available for Windows machines. A major function for the BB android version is to function as a client to the BB desktop version. If you don't own a copy of the BB Desktop software, the usefulness of the BB Android version will be limited.

Port Forwarding Tutorial
This guide shows you how to set up your network for using the app on a different network than your home computer.
Play...
-->

Getting started with Band-in-a-Box for Android 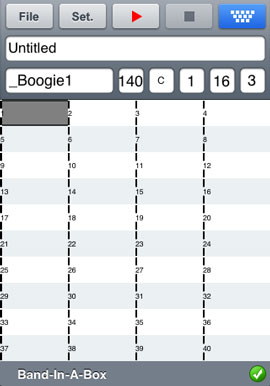 Choose OPEN from the FILE menu. You will see the demo songs that are included with BB Android. You should see "Blues Shuffle Demo" and "Jazz Swing Demo", and you will notice that these filenames are in green. The green indicates that audio (m4a) is available for these songs. This means that they are "ready-to-play" and don't have to be generated by connecting to Band-in-a-Box Server.

Choose "Blues Shuffle Demo": This song was previously generated using BB Android, and the arrangement was made entirely from the chord progression.

Press the Green PLAY button The arrangement sounds realistic, because it is using the high quality RealTracks present in Band-in-a-Box. If the play button were Red, it would indicate that the song needs to be generated by connecting to BB Desktop. Press STOP. 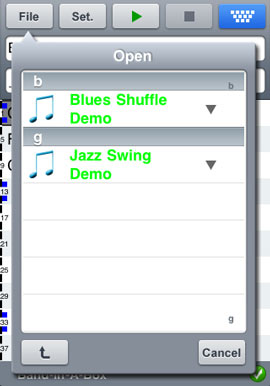 Make some changes to the song.

Press the Keyboard button. This will open up the chord input keyboard, allowing you to edit the chords in the song. Change the third chord to a C7 by highlighting bar 7 and press 7 on the chord keyboard. Close the keyboard by touching the button at bottom-right.

Change the song's style by touching the style field (_BLSHUFF). Choose a different Blues style, such as _BBBLUES. This is another RealTracks style, which is indicated by the underscore prefix in the style name.

Press Play, or double-click on a bar to star playback. You'll be asked to either 'play existing' or 'regenerate'. Since the song arrangement has changed, in order to hear the new style and modified chords Band-in-a-Box will need to regenerate the song. More on how to connect to Band-in-a-Box desktop below. 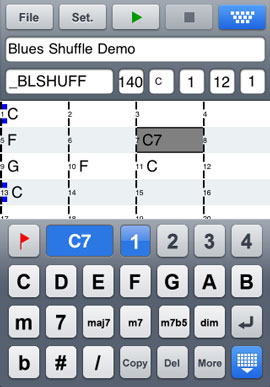 Here are some typical uses for your BB Android app:

Let's enter our own song from scratch.

We will enter a simple blues progression, which is 12 bars long, in the key of C.

Press File and then NEW.

Enter a title for your song, call it 'My Blues'.

Choose a style for the song. Press the Style button (at the left of the screen, below the title), then choose the genre Blues, and select the style _BLSHUFF (Blues Shuffle) which is the 3rd one on the list.

Change the tempo to 120 beats per minute by touching it and using the slider/arrows.

Leave the key signature at C. 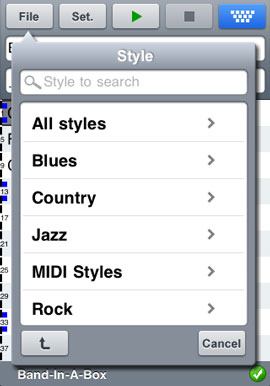 Open up the Chord Keyboard, so that the song is editable and enter the following chords. To enter a chord, highlight the bar in the chordsheet. Then in the keyboard input area, select the beat number (there can be up to four chords per bar), the chord letter (C,F, etc.), followed by the chord type (maj, 7, etc.).

Save the song by choosing File-Save. That's it! You've entered your first song.

Close the Keyboard window. Now to generate your new song, you are going to need to be connected to your Band-in-a-Box Desktop version... 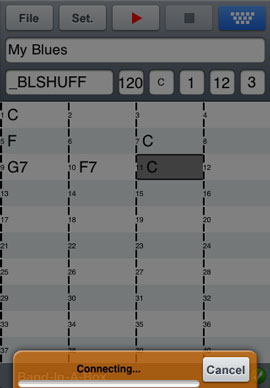 Generating Songs and Connecting to the BB Desktop Version

Since the song has not been generated yet, the PLAY button will be RED. When you press Play, Band-in-a-Box desktop will generate your new song, and then it will be downloaded to you Android. This will happen automatically if Band-in-a-Box Server is already running and you are connected to it - otherwise, you will see the Server Connection dialog. 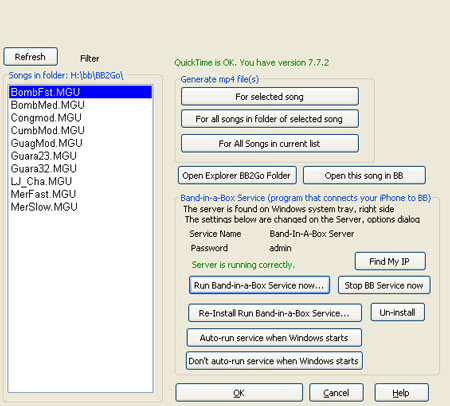 Band-in-a-Box Server can alternatively be started "manually" double clicking on it in the /bb/BBHelper folder.

When Band-in-a-Box Server is running, it will be visible as a green and white note in your task bar, normally at the bottom right corner of your computer screen. Open it to access basic options and see your computer's IP address. The Server password default is admin, and you may wish to change this to your own password. Note that if you are connecting over the internet, you will likely need a different IP address (your public IP) than the one listed in this window. There are a few ways to find out your public IP; one way is to use the button in the BB2Go dialog. 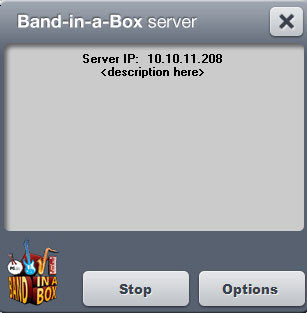 In any case, once you have selected the server or typed your IP, press OK and enter the password (default password is admin).

You will then see "Loading styles". This only happens when there is a new server connection, and BB desktop is telling BB Android what styles are available.

Your song should now generate and download, and start playing. At this point, the song "My Blues" now has audio saved with it, and will be ready to play next time without connecting to the BB Desktop version... 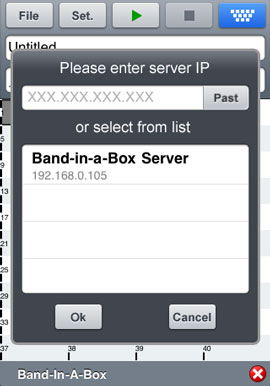 Getting songs from Band-in-a-Box desktop.

You can Get any song from your Band-in-a-Box desktop version, or Send songs that you've done on your Android. To access these options, go to the File menu | Server.

To Get Songs, first place them in the BB2Go folder on your PC. Using the BB2Go window in Band-in-a-Box desktop, you can prepare all the songs so they are ready for immediate playback once downloaded to the Android. On the Android, these prepared songs will appear green.

Note: Another option for downloading songs from your desktop computer is to use the "Download from.." feature - this is described below. 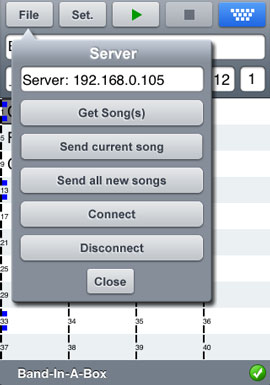 Go to the File menu and select 'Download from..', and then tap [Download from Dropbox] (or Google Drive). If you have not yet signed into Dropbox on the device, you need to tap [sign in], and then [Allow] 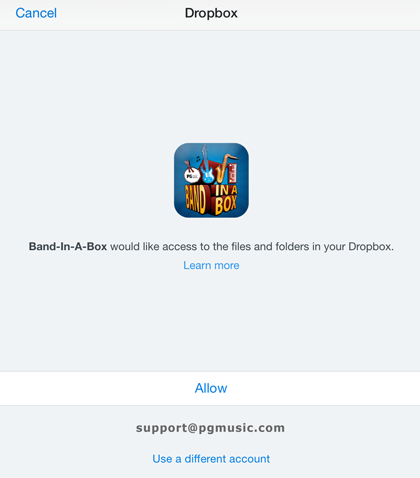 You can download Band-in-a-Box songs (e.g. MySong.MGU) and rendered audio (e.g. MySong_Render.mp4 or MySong_AllMix.m4a), or a zip file containing files. Remember that in order to play the songs on your phone/tablet without a connecting to Band-in-a-Box Server, you'll need to have the songs pre-generated. This means that you should select the rendered file (.m4a or .mp4) as well as the Band-in-a-Box song file. 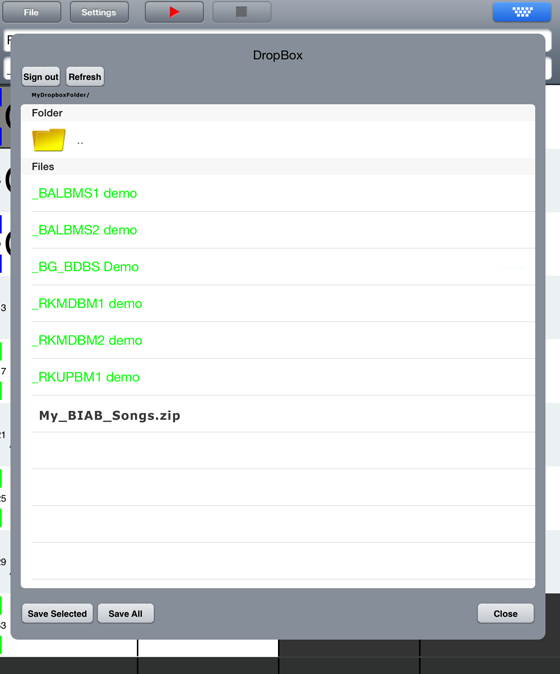 If both your device and your desktop computer are connected to the same WiFi network, and Band-in-a-Box Server is running on the desktop, then the app should connect to it automatically without any additional setup (See "Connecting to BB Desktop" above). If it doesn't happen automatically, you might need to manually type in the IP address. The IP is found in the Band-in-a-Box desktop Server window.

Find your IP address and set up your router.

Here are some things to try if it isn't working