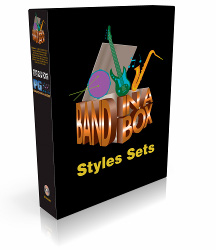 Remember the British Rock Invasion of the 60's, featuring such classic groups as the Beatles, the Rolling Stones, the Hollies, the Dave Clark 5, and Herman's Hermits? With Styles Set #22, '60's British Invasion', you'll have 23 great new styles for 60's British classic grooves; drivin' Rock, gritty Blues, Pop, Folk-Rock, Pop-Latin, Shuffle, and Pop Ballads, in straight and swung 8ths rhythms, in slow, medium or fast, 4/4 and 3/4 tempos. Many of the styles concentrate on a 4-piece group, with 2 guitars, bass, drums and occasional background vocals. Styles Set 22 will make a great addition to your Styles library!