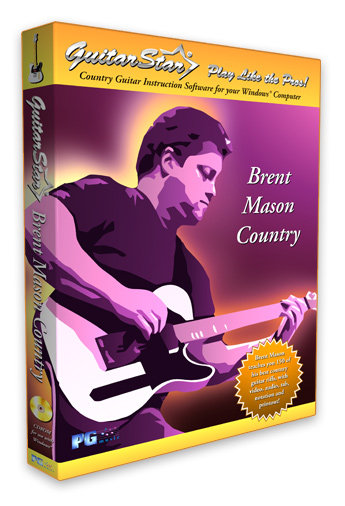 GuitarStar: Brent Mason Country teaches you how to play like a pro! 150 guitar riffs by the Country star are included, and you can learn any of them by pressing different keys on your computer keyboard. Like all PG Music GuitarStar programs, Brent Mason Country is an excellent educational tool for guitarists of all levels- and it's fun to play!

Watch video tutorials of Brent performing each riff, slowing them down, and offering tips and tricks to perfecting each one. Then, play the riffs yourself by pressing on your computer keyboard. Sit back, and view the standard notation and guitar tablature as the notes fly by on the on-screen guitar fretboard!

Transform yourself into a Country GuitarStar

Widely known as Nashville’s #1 guitarist, Brent Mason has been named “Musician of the Year” twice by the CMA (Country Music Association), and he’s the six-time winner of the Academy of Country Music’s “Guitarist of the Year” award. Often called one of the most recorded guitarists in history, he has appeared on hundreds of albums with Country and Pop stars such as Chet Atkins, George Strait, Brooks and Dunn, Alan Jackson, Wade Hayes, Toby Keith, Randy Travis, Neil Diamond, Shania Twain, and more! Turn on the radio, and you’re more than likely to hear Brent Mason! He has played a huge percentage of all the songs on top 40 country music stations (roughly 80 percent), top 40 pop stations, movie soundtracks, TV shows, and commercials. Following the success of his 1st solo album, "Hot Wired," Brent's latest offering is "Smokin' Section." This latest release also features his talented brother, drummer Randy Mason. To learn more about Brent and his music, please visit: www.brentmason.com